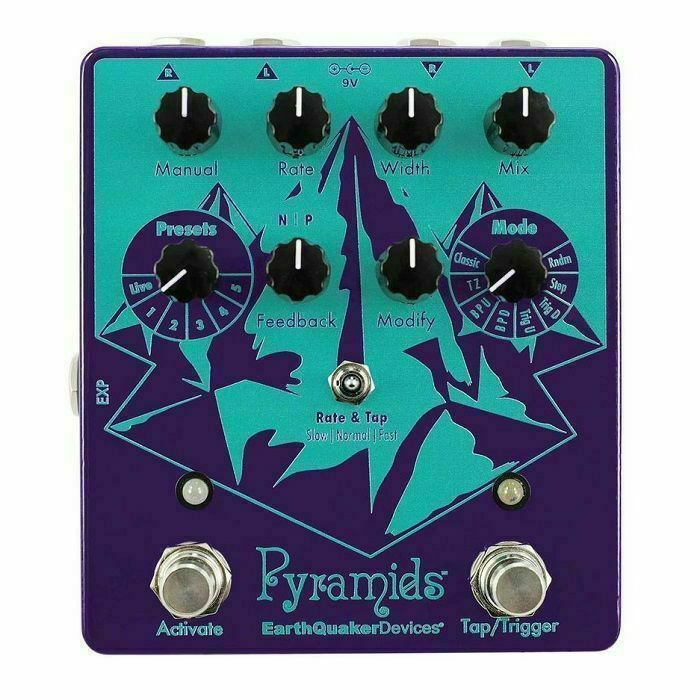 Click 'email me when available'.
By Earth Quaker Devices

Pyramids is a Stereo Flanging Device with five presets, eight flanger modes, tap tempo, tap subdivision, a multifunction Modify control, positive and negative Feedback, and a variable Mix control, which is something you don't see on a flanger every day.

Built upon the same proprietary DSP architecture as the Avalanche Run™, Pyramids delivers convincing jet-engine roar, authentic through-zero tape-style warble, infinite barber pole sweeps, flexible I / O routing, and the ability to re-trigger the LFO cycle via footswitch opens up a fourth dimension of rhythmic possibilities that's sure to tickle your third ear.

Controls:
1. Manual: Controls the delay time of the modulated signal. Manual can also be controlled via expression pedal.

2. Rate: Controls the speed of the LFO as well as the rise time in Trigger Up mode and fall time in Trigger Down mode. The Rate control has three ranges of operation: Slow, Normal and Fast. These modes are selected by the Rate & Tap toggle switch.

3. Width: Controls the frequency range of the LFO sweep. You might also think of it as a depth control for the LFO.

8. Modify: The behavior of this control depends upon which mode you're using:

Through-Zero: Delay time for the unmodulated dry signal. This controls where in the LFO cycle the through-zero point occurs, which is where you'll hear the most drastic cancellation.

Trigger Up: Sensitivity control for the sweep. This controls how quickly the re-triggering reacts to your pick attack.

Trigger Down: Sensitivity control for the sweep. This controls how quickly the re-triggering reacts to your pick attack.

10. Presets Rotary Switch: Selects between Live mode and one of five presets. Pyramids comes with our favorites programmed in, but you're allowed to re-write them if you want. We don't mind.

For standard latching operation, tap the footswitch once to activate the effect and then tap again to bypass.

For momentary operation, hold the footswitch down for as long as you'd like to use the effect. Once you release the switch the effect will be bypassed.

Since the switching is relay based, it requires power to pass signal.

To use with multiple output transformer-balanced isolated pedal-specific power supplies, Pyramids' may be powered from two outlets combined using a current-doubling cable. DO NOT USE A VOLTAGE-DOUBLING CABLE BECAUSE THAT WILL SEND 18V TO PYRAMIDS AND FRY IT LIKE AN OVEREASY EGG AT A GREAZY SPOON DINER. 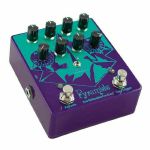 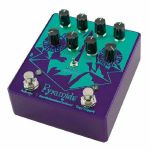 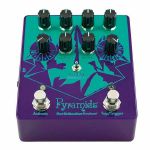 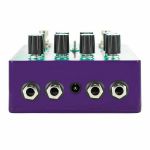 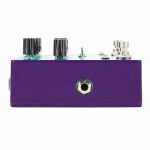 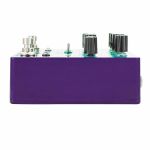